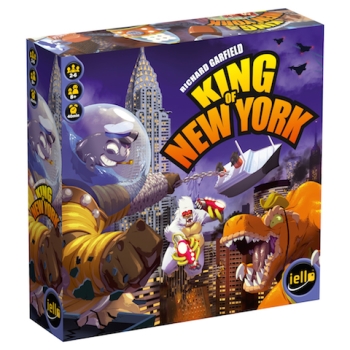 The follow-up to King of Tokyo brings giant monsters to the Big Apple, and builds on the core game mechanics by adding districts, fame, and destruction of buildings.

A few hundred copies of Richard Garfield's King of New York will be available at Gen Con 2014. Published by IELLO, the kaiju-inspired board game is a standalone follow-up to the award winning King of Tokyo. In King of Tokyo, players compete to be the first monster to collect 20 victory points. Each turn, players roll six dice up to three times. The dice determine the actions available to the monster, such as healing damage, attacking other monsters, or collecting energy to purchase power-up cards. King of New York builds on the core game mechanics with a larger game board, new ways to acquire victory points, and the ability to destroy buildings for bonuses.

"What's new in King of New York is that you can now try to become a star in the big city; more specifically, you can achieve "Fame", which nets you [Victory Points], but superstar status is fleeting, so enjoy your time in the spotlight," reports Board Game Geek. The larger game board adds the districts of New York City. Each monster occupies a district, with Manhattan as the ultimate goal. Moving between districts adds a new layer of strategy. "When you attack, you can displace a monster in another district, whether to escape military forces or to find new smashing opportunities. Yes, smashing because you can now destroy buildings and get bonuses for doing so, but the more destruction you cause, the more intense the military response."

The game also introduces six new monsters to play, such as Captain Fish, Kong, and the giant T-Rex, Sheriff. King of New York supports two to six players, ages eight and up. The US and France retail release of King of New York is set for September 2014. Other language editions are expected to release by the end of 2014.