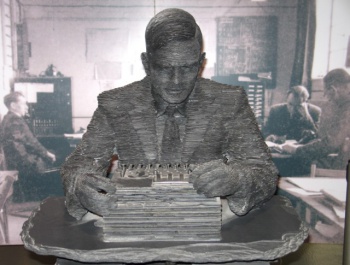 But if you think it's all over, think again. There are other tests ...

Back in 1950, computing genius Alan Turing came up with a baseline test to determine whether or not a computer could be considered intelligent. Though often expressed as 'can machines think' - the words used by Turing himself in the opening sentence of his thesis - Turing warns that the better question, since thinking is difficult to define, is "are there imaginable digital computers which would do well in the imitation game?" If a machine under test conditions can fool 30% of the judges, each of whom have a few minutes' conversation with the device, convincing them it is a human rather than a machine, it passes the test; it is, in other words, a perfect imitation. This weekend Eugene Goostman did exactly that, persuading 33% of the judges at the Royal Society of London that 'he' was a real 13-year-old.

"This event involved the most simultaneous comparison tests than ever before, was independently verified and, crucially, the conversations were unrestricted," says Professor Kevin Warwick of Reading University. "A true Turing Test does not set the questions or topics prior to the conversations. We are therefore proud to declare that Alan Turing's Test was passed for the first time on Saturday."

There have already been criticisms that it's easier to imitate a 13 year old than an adult, since a teenager isn't expected to know as much as an adult. Its creator, Vladimir Veselov, admits that this was part of Eugene's strategy. "We spent a lot of time developing a character with a believable personality," says Veselov, who now intends to focus on making Eugene smarter. He - born Russian, who now lives in the U.S. - and Ukrainian born Eugene Demchenko, who now lives in Russia, put Eugene together.

But this is only the first stepping stone, the baseline established decades ago by Turing. There are other, stricter tests. Can a computer and a human have a 25 minute conversation, and fool half the judges into believing the computer is a person? Can a computer and three human foils have a two hour conversation with each of three judges, and convince two out of three that the machine is more human than the humans?

Turing anticipated that his baseline test would be passed in about 50 years or so, and he was more or less right. The other tests will be much more difficult to pass; the two hour Kurzweil-Kapor test, for example, is anticipated to be a stumbling block until at least 2029. In the meantime, Eugene is the first of what will probably be many hundreds more; machines that can imitate humans closely enough to fool humans into thinking they're real.