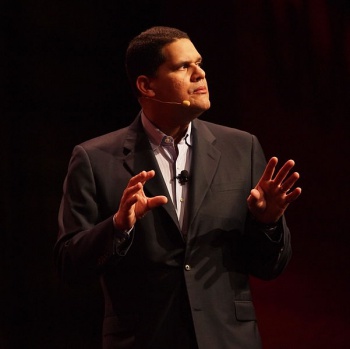 I'd like to preface this post by saying that Nintendo is currently enjoying a pretty close relationship with Twitch, and is most definitely not against the concept of streaming. What Reggie Fils-Aime means when he told Polygon that the Wii U won't be getting Twitch streaming because it's "not fun" is that 30 minutes of just straight gameplay from an average player is probably not going to be very interesting.

"Your specific question of just purely streaming gameplay, what we've got to think through is, so what's fun about that? From a consumer standpoint, what's fun about it?" asked Fils-Aime. He went on to say that initiatives like Mario Kart 8's Mario Kart TV where a much better option, as it allows users to upload "highlight reels" of their best moments to YouTube.

"Kart is fun because its a highlight of the race," he said. "You can make some choices as to what parts are going to be shared. We think that makes it interesting, and obviously the meme of the Luigi death stare is wonderful when that comes out of that type of experience. But in the end we've got to make sure that it's fun."

That's not to say Nintendo doesn't want its games streamed at all. Fils-Aime said that high-level competitive streaming is a very good thing that has value. "with the Smash Invitational, we loved that streamed because that's where you are able to see how these players perform, the moves they make, you can learn something," he said. "That has value to us. And you can expect us to do more of that type of activity, highlighting our games and providing a forum for players to learn how to play better."

"That's different than watching Joe Blow's 30 minute stream, which may or may not have something that's all that interesting," he added.

So while we probably won't see Twitch streaming added to the Wii U like the Xbox One or PS4 features, we'll probably see less of the crazy attempts to ban competitive streaming of its games.