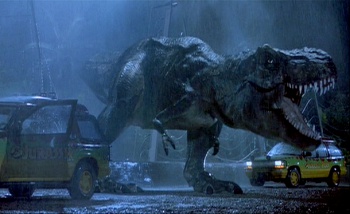 Dinosaurs weren't warm-blooded like mammals or cold-blooded like reptiles, which may have given them a unique evolutionary advantage.

Contrary to what you may have learned from Jurassic Park, dinosaurs actually didn't look much like the reptiles you imagined. (Please take a moment to pick up the shattered pieces of your childhood off the floor before you continue reading.) If that wasn't enough, a new study suggests that they aren't exactly cold-blooded reptiles either. But before you start thinking dinosaurs evolved into mammals from the Super Mario Bros. movie, they're not warm-blooded either. Scientists are now realizing that dinosaurs fell right in the middle of both classifications, which would have provided a massive evolutionary advantage millions of years ago.

Paleontologists have debated for decades whether dinosaurs were warm-blooded or cold-blooded, but a new database on the growth and energy of vertebrates has proven them both right. You see, on average warm-blooded creatures grow about 10 times faster than cold-blooded reptiles, which correlates with a faster metabolism. But when looking at the growth rates of 21 dinosaur species, researchers found that metabolic rates were lower than birds but higher than reptiles. In short, dinosaurs could generate their own metabolic body heat in some circumstances, but are still subject to external temperatures.

Species in this middle-energy range are known to exist, but tend to be rare; leatherback turtles, tuna, great white sharks, and echidnas are some examples. "They generate enough heat to warm their blood above ambient temperature, but don't do anything to maintain it, such as shivering which humans do when they are cold," said John Grady of the University of New Mexico. "Meanwhile, echidna body temperatures can fluctuate by up to 10 degrees when they are active."

Grady notes that this gave the dinosaurs a distinct advantage. Creatures with high metabolic rates grow quickly and move much faster when hunting or eluding prey, at the cost of needing more food. Cold-blooded creatures are slower by comparison, but can eat sporadically to support their growth. The middle-ground of dinosaurs suggests that they could grow quickly while eating less, which is a plus if you're the size of a building.

"It is doubtful that a lion the size of T. Rex would be able to eat enough wildebeasts (or elephants) without starving to death," Grady explained. "With their lower food demands, however, the real T. Rex was able to get really big while still maintaining their advantage over their competition."

In other words? Life finds a way.