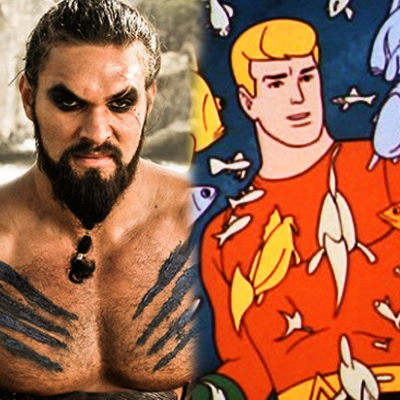 The Entourage joke you are about to make is uncalled for and not funny. Much like Entourage.

One of the worst-kept secrets in Hollywood as of recent was that Warner Bros. wanted former Game of Thrones actor Jason Momoa to play Aquaman, either in his own movie or in a related DC Universe. The rumor had been swirling for so long that Momoa had to ask people to stop asking him about it - after all, even if true he could've been under a gag order - but now HitFix's Drew McWeeny is reporting that it's a done deal: Momoa is DC's Aquaman, and he'll debut with a cameo in Batman v Superman: Dawn of Justice before (presumably) moving on to a bigger role in Justice League.

Created in 1941, Aquaman's origin and backstory have been drastically revised several times, sometimes casting him as the member (or leader) of an ocean-dwelling humanoid race called Atlanteans, other times as the half-human son of an Atlantean woman and a lighthouse keeper, other times as a human raised/conditioned to thrive underwater. In nearly all variations he is amphibious, lives primarily in the sea as its protector, has some level of superhuman strength necessary to survive at ocean depths and can communicate with ocean creatures.

It is unknown what form Momoa's version will take, but apparently his character-design has already been set so that shooting of his Dawn scenes can begin immediately. HitFix's report further confirms earlier rumors that the character's rationale for appearing in the film is related to being angered by damage done to the Indian Ocean during the climax of Man of Steel.

Momoa's casting could signal that Warner Bros. is very close to having fully assembled the rumored roster for Justice League, with only The Flash and the new Green Lantern yet to be named. The studio is widely expected to make a substantial announcement related to the DC Movie Universe at SDCC in July.