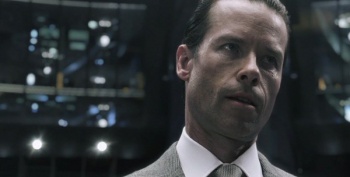 Guy Pearce, who played Aldrich Killian in Iron Man 3, speaks out on Shane Black's interpretation of the Mandarin.

By now, chances are that if you're a comic book fan, you've already seen Iron Man 3. If so, then there's also a very good chance that you might or might not have liked how the Mandarin villain was interpreted in the flick. Speaking to IGN, actor Guy Pearce who played Aldrich Killian in the movie speaks out on how he thinks the character was handled by director Shane Black.

Fair warning before you read on, there are spoilers contained within Pearce's comments. So if you haven't seen Iron Man 3, then best not to read on.

Personally, I loved it, and I was never a comic book fan growing up, so I have no attachment to the [Mandarin]. I mean, I get it. The loyalty to those characters, I totally get it, but based on the sort of single-entity movie -- and particularly based on Ben Kingsley's performance -- I just adored what that turned into. But I do certainly understand that some diehard fans kind of went, "Aww... Come on!"

For more Iron Man stuff, you can check out where Iron Man 3 stacks up against the other Marvel movies in this video, or read up on the US government's own real life Iron Man suit for the military.

How did you feel about the Mandarin in Iron Man 3? Did Black desecrate the villain's identity by turning him into a joke or would adapting the comic book version of the character turn some people off with its stereotyping?