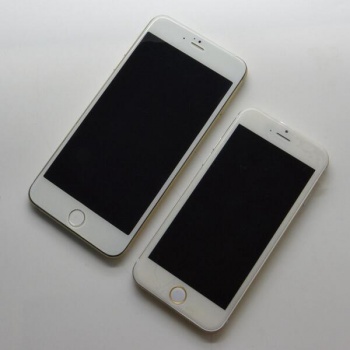 Pictures of what the iPhone 6 would allegedly look like has made its way into the wild, and shows the rumored 5.5-inch variant.

Just this April, an image on what's said to be the iPhone 6 made its way online, and is said to be thinner, and include a bulging camera. Now, over on Twitter, reputable Apple leaker Sonny Dickson has posted what he says are pictures of Apple's next iPhone models. In the image, we can clearly see a standard-sized model that's sized at 4.7, and a bigger variant that's 5.5-inches.

While fake images are almost always a possibility, Dickson has correctly leaked images of the iPhone 5C that turned out to be the real deal. Before you assume that Dickson has units on hand, he confirmed that the iPhones pictured are dummy phones. Keep in mind that even if Dickson has been right in the past, there's still a very good possibility that the final design could change.

If history is any indication, Apple should be revealing the latest iteration of the iPhone very soon for an expected late summer or early fall release window.

What do you make of the new iPhone so far based on the leak? Should Apple forsake copying its competition with a 5.5-inch model and instead focus on new innovations?