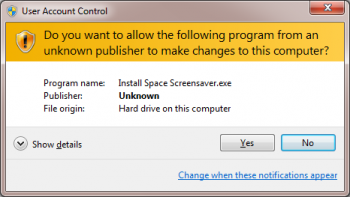 According to a report, 22 to 43 percent of people are willing to install unknown software on their devices in return for payment ranging from a few cents to a dollar.

In news that's kind of baffling, it seems a good number of people are willing to install unknown programs on their PCs for a little pocket change -- and I mean that literally. In a study, it states that between 22 to 43 percent of people are willing to inflict their computer devices with unknown software, even when their OS flagged the program as a potential threat, in return for payments ranging from a penny to a dollar. According to Nicolas Cristin who wrote the report, just 17 people out of 965 were running virtual machines that could limit the potential damage; and that only one person told him in the debrief that they were doing this on purpose.

Important to note that the study isn't done on a grand scale, so we don't know if a large consensus would react the same way. Nonetheless, it's never a good idea to install unknown software in your devices regardless of the incentive. And here I thought that malware had to be disguised as popular games for people to bite.

In somewhat related news, a cyberattack was traced to an infected fridge which we reported on early this year, which sounds odder than it really is. Would you be willing to install programs in your devices for a sum? If so, how much would it take?