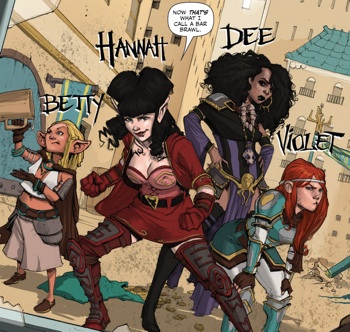 Pukeko Pictures and Heavy Metal want to take Rat Queens from the comics and to your television screen.

Rat Queens is a relatively new entry in comics pantheon: the series launched in September 2013 and its 7th issue is due out this month. However, it's already garnered its fair share of attention for its twist on conventional fantasy - creator Kurtis Wiebe described the concept as Lord of the Rings meets Bridesmaids - and female-driven cast (the titular Rat Queens) who turn traditional gender roles on their heads. It's a fun read and a refreshing take on the classic genre. The series has already picked up an Eisner nomination and plenty of praise from critics, but is this freshman series ready for (literally) prime time?

Pukeko Pictures and Heavy Metal say yes, with plans to adapt the title into an animated series. The project is still at an early stage - no network has picked it up yet - so what we might actually see on-screen in up in the air. However, Pukeko and Heavy Metal plan to adapt the series into a 30-minute show to pitch to TV networks. Will it take off? We definitely hope so.