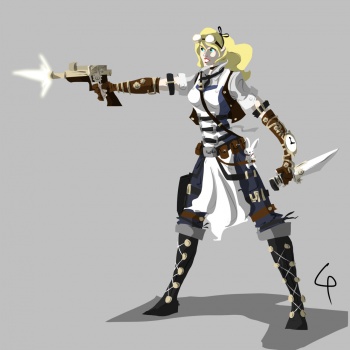 The stars of Frozen, The Little Mermaid, and plenty more Disney classics get some tough love in this gallery of fan art.

Animated Disney characters do their fair share of fighting, but not always in the most sensible attire. Artist and Tumblr user Calvin has fixed that problem with some snazzy shots showing what our favorite Disney heroes, heroines, and villains would look like as fierce warriors.

It's hard to pick a favorite in this impressive bunch, but there are definitely a few standouts. Ariel looks amazingly badass, and it's nice that she gets to keep her human legs in warrior form. Snow White and Bambi look like they're ready to ride into battle, and Aladdin's gear is bound to be more protective than his street rat garb. On the villain front, both Ursula and the Queen of Hearts are sporting impressive warrior makeovers, and that's just to name a few.

I'm not sure what inspired this recent trend of "Disney Characters as X" fan art, but I can't be the only one digging it. Keep it coming, internet artists. What's next? Disney staples as Les Mis characters? Disney princesses as 8-bit game icons? The possibilities are endless.

Source: Tumblr via The Mary Sue