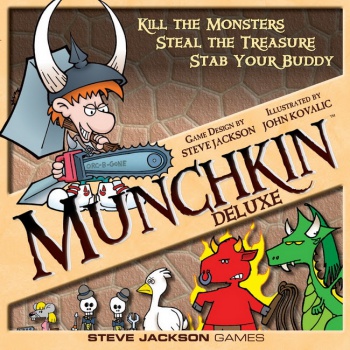 BOOM! Studios will adapt Munchkin, the tabletop game of killing monsters and stealing their stuff, into an ongoing comic series.

If you're a fan of tabletop games or dungeon crawlers, odds are you've been paying some attention to Steve Jackson's Munchkin. Parodying Dungeons & Dragons and the players who enjoy them, Munchkin condenses the usual "fight monsters and steal loot" gameplay into a two-hour card game. Many a tabletop group have enjoyed Munchkin and its expansions since, but now the experience is kicking its way into the world of comics. Today BOOM! Studios announced it will publish the official monthly Munchkin comic book, adapting the antics of a Munchkin clan across an ongoing storyline.

"There's a big contingent of fantasy RPG fans here at BOOM! HQ and Munchkin's irreverent, wry approach to the tropes of the genre is right in our wheelhouse," said Filip Sablik, BOOM! Studios Vice President of Publishing and Marketing. "It's weird and wacky, and we can't wait to explore a side of the game that hasn't been seen before."

I've enjoyed several games of Munchkin over the years, but never really thought of it as a game that needed an ongoing comic book. The tabletop game doesn't really have a plot to speak of (save the ones players create at the table) so the comic would need to introduce a new world for its borderline sociopathic cast to pillage. Regardless, given the success of The Order of the Stick or Rat Queens, Munchkin should be in good company. Although I imagine this version will be cartoonishly violent and filled with far more backstabbings.

Not that there's anything wrong with that when loot's involved.

No release date is available so far, but Munchkin fans should learn more during convention season. Bleeding Cool is also reporting that the comic will feature four-part story arcs and bonus Munchkin cards.