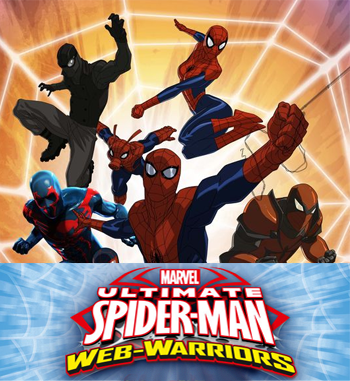 Spider-Man has been having a rough time at the movies, but he's been doing pretty well for himself in animation. Now, it's looking like the cartoon Spidey is looking to get even more ambitious.

Marvel Comics is gearing up for a big November event series titled Spider-Verse, which will see the Peter Parker of Earth 616 (aka "mainstream" Marvel Universe) crossing paths with multiple other Spider-Men from various alternate timelines and parallel dimensions. But before that, a slightly different Spider-Verse story is coming to the third season of Disney XD's popular animated series Ultimate Spider-Man.

The series (which, unlike Sony's live-action Amazing Spider-Man movies, allows Spidey to interact with other Marvel fixtures like S.H.I.E.L.D, The Avengers and The X-Men) is set to return August 31st with a new title, Ultimate Spider-Man: Web Warriors, and a new focus on larger, more involved storylines. One such story, said to spread across the first half of the season, will see Peter Parker meeting many of the more popular "other Spider-Men" from the comics - some familiar, some new and some slightly reimagined.

Details are being kept to a minimum so far, but appearances have already been confirmed for the gritty Spider-Man Noir, Spider-Man 2099 (whose future world will be realized through a distinct computer-animation style), a new Spider-Girl from a gender-reversed universe named Petra Parker and even Peter Porker: Spider-Ham - a cult-fave character from Marvel's 1980s kid-friendly animal comics.

The biggest news, however, will be the appearance of Miles Morales, a Black/Latino teenager who became the new Spider-Man of the "Ultimate" comics-universe shortly after the death of "Ultimate" Peter Parker. A controversial but also popular recent addition to the Spider-Man mythos, Web Warriors will be Morales' first appearance outside of the comics.