A map shows us what the world of Westeros from Game of Thrones would look like if its setting was in the US.

Ever wondered what the mythical world of Westeros from HBO's Game of Thrones would look like if it was based in America? Well, wonder no more, as the people from RoadTrippers have created just that -- a map of the United Kingdoms of Westeros.

Listed below are the areas in Game of Thrones equated to US cities and a brief description of each.

Detroit, stronghold of the North, makes no apologies. It's cold, harsh, and is only a pale reflection of what it used to be. Even still, the decay hasn't stopped the steel-wielding city from being a beautiful, proud place.

Capitol of the Kingdoms, Washington, is the Red Keep of America and the seat of ultimate power. King's Landing, much like the White House, is surrounded by a great wall, and is protected by the City Watch of King's Landing, aka the gold cloaks.

- Oldtown = St. Augustine
An ancient town, the oldest in the realm.

Both are the oldest cities in the country, dating back to the first men on the continent.

Casterly Rock overlooks the Sunset Sea, and is a large part of the bustling seaports. The castle was built over catacombs and into rock formations. Seattle is protected by the Olympic Mountains, built overtop of the Seattle underground (catacombs in their own right), and is one of the largest seaports in the country.

A wealthy, attractive city, filled with money, excess, and beautiful women. This one speaks for itself.

- Eyrie = Appalachia
An unusual land that prefers to keep to itself.

A mountain-top stronghold, isolated from most civilization, where the inhabitants are strange and suspicious. You see where I'm going here...

- Harrenhal = Denver
A Mile-High city that reaches above the heads of the other Kingdoms.

No castle in all of Westeros can match the height of Harrenhal. It's a Mile-High city above the Seven Kingdoms.

- The Wall = Canada Border
An impenetrable northern border. Watch out for the White Walkers.

The Wall sits between the Seven Kingdoms, protecting the people of Westeros from the Wildlings beyond it. The Wall is manned by the sworn brotherhood by name of the Night's Watch. Sounds sort of like Border Patrol doesn't it?

Castle Black is one of three remaining manned castles at the Wall, and is inhabited by the Night's Watch.

Sunny, hot climates all year long. The Dornishmen are different from the rest of the Seven Kingdoms, and much like it, in Southern California, the customs are strange and peculiar.

Pictured below is the actual map for each US city. You can also check out the images that compare the city to its Westeros counterpart. 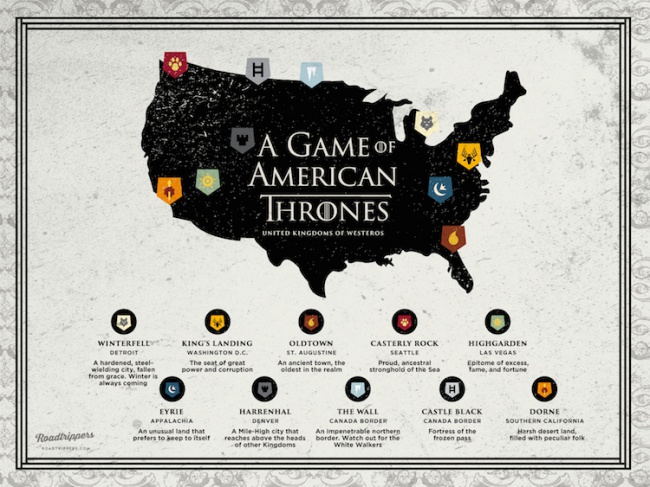 For more Game of Thrones reading, make sure you catch up on our season finale review of Game of Thrones: The Children -- provided you've seen it already, of course, as it's littered with spoilers.

Do you agree with the picks? If it was up to you, how would you plot out Westeros across America?