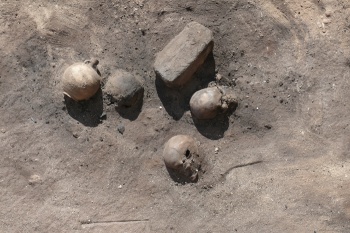 Archaeologists have uncovered the remains of an ancient Egyptian epidemic so terrible that it is believed to have contributed to the fall of the Roman Empire.

In the Funerary Complex of Harwa and Akhimenru in the ancient city of Thebes, the Italian Archaeological Mission to Luxor (MAIL) found bodies covered in a layer of lime, a substance historically used as a disinfectant, as well as a giant bonfire containing human remains in which plague victims were cremated.

The remains were dated based on pottery to the third century A.D., during which a series of epidemics today known as the "Plague of Cyprian" ravaged the Roman Empire. Saint Cyprian, a bishop who believed the plague signaled the end of the world, described the grisly effects of the epidemic. "The bowels, relaxed into a constant flux, discharge the bodily strength a fire originated in the marrow ferments into wounds of the fauces (an area of the mouth)," he wrote in Latin in a work called "De mortalitate." The "intestines are shaken with a continual vomiting, the eyes are on fire with the injected blood," he wrote, adding that "in some cases the feet or some parts of the limbs are taken off by the contagion of diseased putrefaction..."

The plague "according to some sources killed more than 5,000 people a day in Rome alone," wrote Francesco Tiradritti, director of the MAIL, in the latest issue of Egyptian Archeology. According to modern day scientists, the plague may have been a form of measles or smallpox, and it contributed to the fall of the Roman Empire. "It killed two Emperors, Hostilian in A.D. 251 and Claudius II Gothicus in A.D. 270," wrote Tiradritti. It is "a generally held opinion that the 'Plague of Cyprian' seriously weakened the Roman Empire, hastening its fall."

During the H1N1 scare, it was said that we are overdue for a pandemic. Do you believe we're prepared to survive such an event with minimal casualties, or do you think a plague could bring our modern world to its knees?