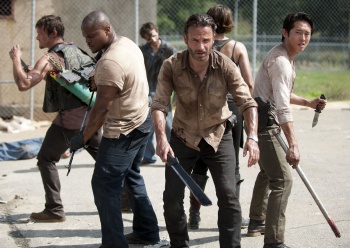 Gale Ann Hurd's been in the entertainment business for over 20 years; she produced a little thing called Terminator back in 1984, Aliens in 1986, The Abyss, Terminator 2: Judgement Day ... the list goes on, and these days she's The Walking Dead's executive producer. When the Guardian caught up with her at the Cannes Lions festival the subject of piracy soon dominated the conversation. After all, The Walking Dead is second only to Game of Thrones in the piracy stakes; is being heavily pirated really better than an Emmy?

"I think that's really dangerous thinking," she responds. "We are poised on the precipice ... because of the prevalence of piracy. The content creators won't get a revenue stream, to the point that they won't be able to create." It's not quite end times over at The Walking Dead - Hurd suspects there's a season or two left in Kirkman's material - but Hurd strongly feels piracy threatens the industry as a whole.

Google and the advertising industry could be more effective at dissuading piracy, Hurd feels. "Search engines should be able to filter out pirated websites," she says, pointing out that in searching for House of Cards she was unable to find Netflix as an option in the first 50 hits of a Google search.

"When you do go on these websites, they look legitimate," she continues. "They have advertising from well-known brands ... How would a consumer know the difference between a legitimate site and an illegitimate site?"

It's worth bearing in mind that the problem isn't just a piracy issue; the business model as a whole is burdened with ridiculous policies that lock whole regions into a system in which piracy or paying through the nose are the only two options on the table. That, and long gone are the days when Australia, for example, was happy to wait a few days, or weeks, or longer, for its content. Something needs to change, Hurd's right about that; but is it Google's search protocols, or something else?