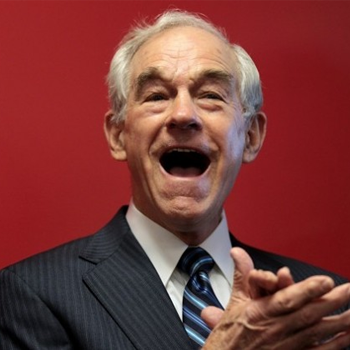 Former U.S. Congressman will cameo alongside Sean Hannity, Glenn Beck and others in conclusion of Ayn Rand trilogy

You're going to have to keep waiting on that Bioshock movie, but the "real" Andrew Ryan's magnum opus is willing itself back into theaters for a third and final push with Atlas Shrugged Part III: Who Is John Galt? - and it's bringing some newsworthy names along with it.

Former Texas Congressman Ron Paul (last seen on movie theater screens being pranked by Sacha Baron Cohen's Bruno) will make his acting debut in a yet-unspecified role in the film, as will Fox News pundit Sean Hannity, radio personality Glenn Beck and political activist Grover Norquist. As was the case with the previous two installments, new stars will take over all of the leading roles - almost no role has been played by the same actor throughout the series (of note: Star Trek: DS9's Armin Shimmerman, the voice of Andrew Ryan in Bioshock, had a small role in Part I, while Super Mario Bros: The Movie's Samantha Mathis played Dagny Taggart in Part II).

Set amid an economic collapse in a dystopian United States, Shrugged principally concerns a group of industrialists, businessmen and artists who band together under the leadership of an enigmatic inventor to liberate others like them from government persecution and "ride out" the near-apocalypse so as to rebuild in its aftermath. The book (and films) are primarily intended as a narrative illustration of author Ayn Rand's Objectivist philosophy.

While the feature film trilogy (the previous two installments of which were both critically-panned box-office failures) is the passion project of wealthy fitness-equipment entrepreneur John Aglialoro, this most recent installment was partially funded by a Kickstarter campaign. The final installment will be directed by James Manera, whose previous credits include a television documentary and a single episode of Nash Bridges.