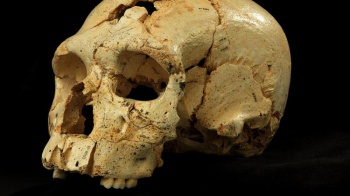 According to a new study, Neanderthals evolved as distinct groups of their ancestors clashed for territory.

The study, published in the journal Science, analyzed 17 fragmented skulls found in northern Spain and revealed an unexpected level of diversity in the facial features of 430,000 year old hominins. In a recent news conference, lead study author and professor of paleontology Juan-Luis Arsuaga, compared ancient Europe to Game of Thrones, with "houses" of Neanderthal ancestors clashing for territority.

"As in the famous saga, there was never a unified and uniform middle Pleistocene kingdom, but a number of houses living in different regions and often competing for the land," said Arsuaga. "According to this scenario, hominid evolution was not a peaceful and boring process of very slow change across an immense land. There was not simply one kind of hominin living in that big territory."

"I'll give you an answer in the next month," Arsuaga said when questioned.