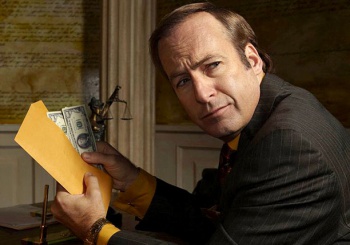 AMC has delayed the premiere of Better Call Saul until early 2015.

Fans of AMC's Breaking Bad will have to wait a little longer for the spinoff centered on crooked lawyer Saul Goodman. Better Call Saul has been delayed from its previously announced September 29, 2014 premiere until early 2015. AMC announced that the prequel series has also been renewed early, extending the series to two seasons. AMC president Charlie Collier made the announcement on Thursday, saying, "We join the fans in eager anticipation for this series, and today we happily confirm that our initial Saul order is for two seasons and a total of 23 episodes." Better Call Saul stars Bob Odenkirk as Saul Goodman. Jonathan Banks will reprise his role as private investigator Mike Ehrmantraut in the series.

Better Call Saul will explore how Goodman got into providing legal advice and support to criminals in Albuquerque, New Mexico. Breaking Bad creator Vince Gilligan will direct the pilot episode. Breaking Bad writer-director Peter Gould, creator of the Saul Goodman character, was set take over as showrunner, but AMC has announced that Gilligan will stay on and both he and Gould will serve as co-showrunners. Late last year, Gilligan told Entertainment Weekly how Better Call Saul will differ from Breaking Bad. "It will be Saul Goodman's world, it won't be Walter White's, and it will have a different feel, even though there will be some overlap on the Venn Diagram that exists between Breaking Bad and Better Call Saul," says Gilligan. "But it will have to succeed on its own terms as its own show. If it doesn't, it won't be satisfying, and satisfaction is the key word. We want to satisfy." Gilligan is also hoping to secure guest appearances from Breaking Bad stars Bryan Cranston and Aaron Paul.

AMC greenlit the prequel series last September, shortly before the finale of Breaking Bad. All five seasons of Breaking Bad are now available to watch on Netflix, including the option to watch the series in full 4k resolution.