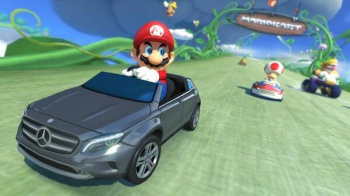 The Mercedes-Benz-themed Mario Kart 8 kart will be available as a free download.

Remember that bizarre Mario/Mercedes-Benz crossover commercial? Well, as part of an on going cross-promotional campaign for Mercedes' new GLA class car, a "Mario Kart-ified" version of the vehicle was announced to be coming as Mario Kart 8's first piece of free downloadable content. At the time, the DLC was only announced for Japan, but now, Nintendo of America has confirmed that it will also be coming to the US.

"We're planning to release a GLA-Class kart from Mercedes-Benz for Mario Kart 8 this summer," said NOA over its official Twitter account. "Stay tuned for more info!" The initial Japanese announcement also stated that the DLC was coming in "summer," so we will probably end up seeing it at the same time, if not shortly after, Japan.

Nintendo has been dipping its toes into DLC this generation, a practice which the company was slow to adopt. New Super Mario Bros. U, for example, had the New Super Luigi U DLC made available both as a digital download, and as a retail disk. However, the fact that the Mercedes-Benz cart is being released as a single, free, download suggests that additional DLC karts and characters may make their way to Mario Kart 8 in the future.

It's certainly a pretty odd cross-promotion, and the Mercedes-Benz does looks quite out-of-place in Mario Kart, but hey, free is free.