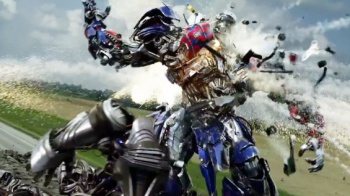 Age of Extinction producer Lorenzo di Bonaventura claims a second Transformers trilogy is not not planned, but it's being made one movie at a time.

Contrary to earlier reports that Transformers 5 is already locked in to a 2016 release window, that's apparently not 100 percent confirmed. Speaking to IGN,Transformers: Age of Extinction producer Lorenzo di Bonaventura states that while the studios is not not planning on doing a trilogy, it's far from a done deal, and they are taking it one movie at a time.

We're not planning on doing a trilogy. We're not not planning on doing a trilogy. It's really a one-movie-at-a-time philosophy. It feels a little arrogant. Both [director Michael Bay] and I feel like it's a little arrogant of us to presume success each time. We know our fans are really out there and they're going to come, so we presume a certain amount of success. But all the energy will be thrown into the next movie, if we're lucky enough to get there.

Just in case you're wondering, it seems Transformers won't have spinoffs, either -- at least for now. Bonaventura claims the lore of the franchise is so rich, that they don't need to do it, and spinoffs tend to happen when a movie franchise has "plateaued."

I think one of the things that people underestimate about the Transformers mythology is how rich it is...If you actually look at the bible, if you would, there is an enormous number of characters; there's a helluva lot of storylines, etcetera. Honestly, there's been no discussion of it because we've been in the business of making it bigger and bigger. I think a lot of those spinoffs tend to happen when something's plateaued. We're not at that place yet, hopefully. We're going to find out with the audience.

Are you happy that a second Transformers trilogy is not set in stone yet or would you rather they plot the storyline out well in advance? The franchise's next entry, Transformers: Age of Extinction, is set for release this coming week on June 27 in North America.