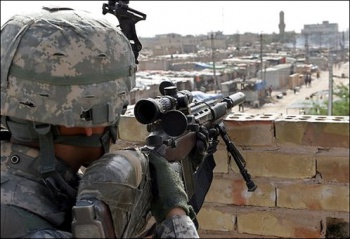 DARPA is looking for a BlockADE (Block Access to Deny Entry) barrier system that can fit in cans for military use.

The US Government's Defense Advanced Research Projects Agency (DARPA) is not only seeking help from gamers to test military software vulnerability, putting Special Forces personnel on "stealth" dirt bikes, but now is actively looking for proposals for a "BlockADE" (Block Access to Deny Entry) contraption that would automatically form a wall from material crammed into a canister measuring 1 ft. by 6.5 ft. or even smaller, for use on the field. Troops can then use these walls to not only create instant cover on the battlefield, but also for blocking off entrances, create a makeshift building and more, all with the touch of a button. DARPA's proposal also wants the device to slow down attackers with saws and axes, but is also aiming to include extra features such as "ballistic resistance." Bear in mind that such a system is far from being made into a working prototype or one that can be used on the field in real life. But if and when it does, expect troops to have instant cover whenever they need it, which should save lives.

In related news, the military is testing its own Iron Man suit and wants civilian help for components. If that didn't sound far-out enough, the US military also said that it's "confident" it can stop a real-life attack by Godzilla, which I'm not 100 percent confident that they can. I mean, have you seen Godzilla chew tanks and choppers like they were made of paper?

More and more, it seems sci-fi and video game tech is slowly becoming a reality for real-life use in the military. What tech do you think can feasibly made next and be of actual use?