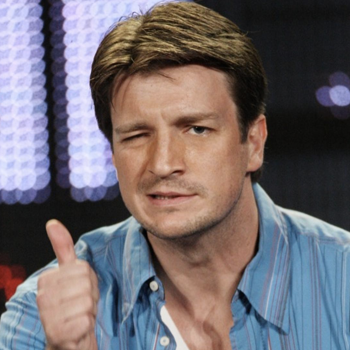 Nathan Fillion will have a small cameo in the upcoming movie Guardians of the Galaxy.

Update: Schmoes Know claims to have learned from a "very reliable source with intimate knowledge" of Guardians of the Galaxy the role Captain Tightpants (Nathan Fillion) will play in the film. To protect those that are sensitive to spoilers (I had to debate with myself if I wanted to check), we won't list the character on this page, but feel free to check here.

Original Story:Back in April, Nathan Fillion teased he may make an appearance in the highly anticipated Marvel film Guardians of the Galaxy, much to our delight.

Now, after chatter started again about Fillion's role in the film, Director James Gunn confirmed on Twitter that Fillion will in fact make an appearance, albeit a very small one.

â€œ@STARS_TyranT: Are the rumours true that he has some part in the film?â€ @nathanfillion has a very small fun cameo he did as a favor to me.— James Gunn (@JamesGunn) June 21, 2014

Nathan Fillion is best known for his role as Captain Malcolm Reynolds in Firefly. James Gunn directed the superhero movie Super, and wrote the story for the Suda51 2012 game Lollipop Chainsaw.