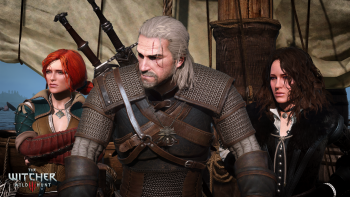 The documents reveal details about The Witcher 3's story, missions, enemies, the ending, and "boob physics."

Spoilers for CD Projekt RED's upcoming game, The Witcher 3 are online following the stealing of a CD Projekt RED employee's Google Drive information, accidentally made public. The files were then posted to 4chan and Reddit.

The files include spoilers for The Witcher 3's story, missions, enemies, an expansive map, and the ending. CD Projekt RED advises against accessing the files so that fans avoid any spoilers. "It has come to our attention that some of the production files for The Witcher 3: Wild Hunt have emerged on the internet," Michal Platkow-Gilewski, head of CD Projekt RED marketing, said of the leak. "A portion of the files contains information about the story of the game, so we strongly advise against accessing them, as this may heavily impact and spoil your future gaming experience." Additionally, he stated the leak does not affect the development cycle whatsoever.

The files indicate that exclusive features may be available in the Xbox One version. A document states, "SmartGlass will not be supported yet," and "Kinect will not be supported yet." A different document states that CD Projekt RED had reached a "fully functioning, full-featured core version of the game with main path story and plot quests for all characters completed and implemented" this February. There's still a long list of tasks, including final music, dialogue recording, and debugging.

Additionally, in the leaked internal design documents is one concerning the E3 demo. It describes how the opening sequence will play: "We start with a cut-scene with the camera descending down on the Baron's castle, showing off the lovely open world surrounding it. The camera tracks in on the window of the cottage where we talk to Keira Metz. Cue dialogue.

"We talk to Keira Metz and she gives us a task: remove the curse from the tower in the swamps. (Boob physics eye candy, appropriately prepared dialogue)."

Along with the casual sexism, this leak is a bit embarrassing for CD Projekt RED, but it will not alter the game's development cycle. The Witcher 3 will release on February 24, 2015, for PS4, Xbox One, and PC.