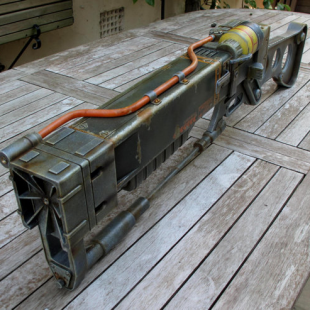 Artist Thomas Hughes is selling Fallout 3 laser rifles through his Etsy page for £395.00.

When it came to Fallout 3, I was never much of a fan of the laser weapons. Not that I'd turn one down if I found myself in that wonderful spot of facing down a Deathclaw and being otherwise out of ammo, but by-and-large I liked gun with bullets. I always just found something more satisfying with pumping my foes full of lead as opposed to disintegrating them into a pile of smoking ash. Even being an admitted shunner of lasers however, I have to admit that I wouldn't mind having one of my very own to hang on my wall and occasionally brandish to scare off the missionaries who knock on my door every two months.

Thanks artists Thomas Hughes, that's a dream that might be in my grasp. Based in England, Hughes has recently taken to selling hyper-detailed replicas of the AER9 Laser Rifle featured in Fallout 3 Measuring at a meter in length, his rifles are "cast in fiberglass and resin pieces and individually hand painted." As nice as that sounds, they're also quite pricey. Buying just one of these costs £395.00, plus shipping.

As hefty as that price tag is however, it takes all of one glance at the product pictures to see exactly why these costs what they do. Put shortly, these are some gorgeous looking laser rifles. Well, at least as gorgeous as a weapon that survived a nuclear apocalypse and probably spent a century or two rotting in the dirt is supposed to look.