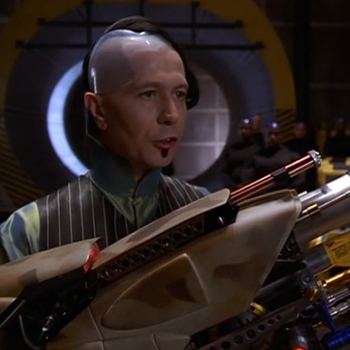 If you live in the Los Angeles area and happened to hear a blood-curdling scream earlier this evening, it might well have been 20th Century Fox's investors for Dawn of The Planet of The Apes getting word that the July/August issue of Playboy Magazine includes an in-depth interview in which star Gary Oldman slams "political correctness," defends Mel Gibson's anti-semitic rants and mused about calling U.S. Congresswoman Nancy Pelosi "a f****** useless c***."

The famously private acting legend, whose stature as a rare conservative-leaning Hollywood presence has been long known, unloaded on these and a variety of topics toward the end of the lengthy interview when the subject turned to public controversies involving celebrities like Alec Baldwin and Gibson (whom Oldman describes as being "...in a town that's run by Jews and he said the wrong thing because he's actually bitten the hand that I guess has fed him") before segueing into a rant against Jon Stewart and Bill Maher being able to "hide behind comedy and satire." He also came to the defense of a Creationist schoolteacher being sued for discrimination by the parents of a Buddhist student.

Elsewhere in the interview (which is quite a fascinating if lengthy read), Oldman talks candidly about raising his sons, his battle with alcoholism and subsequent sobriety. He also offers negative appraisals of some of his most famous roles, some of which are guaranteed to shock many fans: Sid & Nancy? "I didn't want to make it in the first place." Immortal Beloved: "I was the wrong person to play Beethoven." The Fifth Element: "Oh no. I can't bear it." He also dismissed his fan-favorite roles in the Harry Potter and Dark Knight franchises with "It was work."

It wasn't all doom and gloom, though: Oldman did offer praise to the script of Apes, along with expressing admiration for conservative political commentator Charles Krauthammer, David Bowie and Demi Moore (who he credited with convincing him to get sober over a decade ago). After Apes, he will next be seen in Child 44.

Source: Playboy
(Note: It's PLAYBOY, so link is obviously NSFW.)