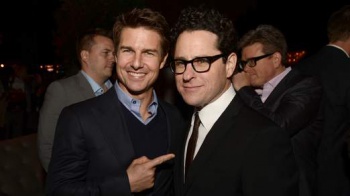 Update: A representative for Tom Cruise denies the star will be in the Star Wars: Episode VII, but we'll see what actually happens when the upcoming Star Wars series is closer to release.

Original Story: Prepare your bunkers, as the Cruise Missile might be hitting the Star Wars movie franchise. A recent report claims superstar actor Tom Cruise (Edge of Tomorrow, Mission Impossible) is "in talks" with director J.J. Abrams for a possible appearance in Star Wars: Episode VII. The Sun reports that Cruise, who's in London, met in a hotel with Abrams to discuss the possibility of a cameo appearance in the sci-fi film's seventh entry, which is currently filming in Pinewood Studios in Buckinghamshire. While the source might be a bit suspect, it's worth noting that Cruise and Abrams are already working together on Mission: Impossible 5 for a 2015 release, and the rag has nailed down Paul Bettany's role as the "Vision" in The Avengers sequel, Age of Ultron. Cruise's reps have not responded when asked to comment on the rumor's validity.

Star Wars: Episode VII has been quite active in the news recently, with a report surfacing that the movie's villains will be called "Jedi Hunters." In rather bad news, Harrison Ford is said to miss 6-8 weeks of shooting time due to a set-related injury, which might affect Episode VII's projected December 2015 theatrical release. Now, for something much more lighthearted, make sure you watch this Star Wars and Guardians of the Galaxy mash-up video to see Luke, Darth Vader and the rest of the cast injected in a trailer for Guardians of the Galaxy.

Is Cruise appearing in Star Wars: Episode VII a rumor you want to come true? Are you even ready to see Maverick appear as a Jedi or would you rather he steers clear of the franchise altogether?