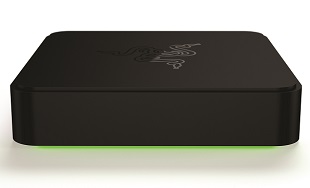 Same design team behind the Razer Blade is designing the micro-console.

Update: We've added an image of the micro-console, although we're unsure if it's a render or the real deal. We'll add more details when they surface.

Original Story: There were plenty of surprises during the Google I/O keynote today, but gamers got a shock of their own when Google confirmed that Razer would be making an Android TV micro-console.

Razer quickly followed the announcement with a public confirmation of their own (seen here on Twitter) along with a press release, seen below.

Razer CEO Min-Liang Tan is calling his Android TV device "a console of the future," as it's expected to neatly wrap up gaming experiences of all shapes and sizes with all the major media comforts found on existing devices. I'm not sure if I can call it a "console of the future," myself, but the expected small form factor, and possible compatibility with PC peripherals (that bit is just a guess) will keep me interested until release.

Tight-lipped is the phrase for Razer at the moment -- there's no information on system hardware just yet -- but Razer did confirm that the micro-console would be released in the Fall, just in time for holiday shoppers.

I'm expecting Nvidia hardware in Razer's micro-console, as the Tegra K1 system-on-a-chip would be right at home in such a device, but solutions from Qualcomm, or even Intel, could be possible, too.

SAN FRANCISCO (Google I/O 2014) - Razer™, a provider of connected entertainment devices and software "for gamers, by gamers," announced today plans to create a Razer micro-console. The new device, powered by Android TV, will stream movies, music and other apps for large-screen entertainment with an emphasis on gaming.

Android TV is an entertainment interface that allows users to find and enjoy content on their televisions. The Razer micro-console can be navigated with a special mobile application that operates from any Android tablet or smartphone. Voice control is built into Android TV, leaving access to entertainment just a few words away.

Enhancing the gaming experience on Android devices is a key focus for Razer. Razer's experience in designing high-performance gaming systems, controllers, keyboards and mice will contribute beneficially to the device development. Gaming-related software is also an area Razer knows well. With 9 million active users registered on its platform, the company offers a range of applications for communication, performance optimization, and device personalization.

"This is a console of the future," says Min-Liang Tan, Razer co-founder and CEO. "Built on Google's incredible Android TV platform, the Razer micro-console incorporates not only hardcore and casual gaming, but music, movies and other entertainment and social applications, all on an affordable system."

Razer previously demonstrated success blending hardware and software together with the Razer Nabu smartband, a 2014 "Best of CES" winning device. Over the past two years, Razer won a combined four official "Best of CES" awards at the International Consumer Electronics Show.

The Razer micro-console is scheduled to be released this fall.