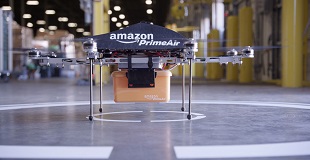 The FAA grounds drone delivery services before they have a chance to take off.

Were you excited at the prospect of receiving Amazon packages by way of a low-flying quad- or octa-rotor drone? Sorry, but the FAA is here to burst your bubble, saying that such delivery drones are strictly illegal.

While the rules and regulations could change later this year, or in 2015, the FAA still considers drones to be a sort of model airplane. Under that classification, drones are barred from doing non-hobby or non-recreational tasks, like "delivering packages to people for a fee," or "determining whether crops need to be watered that are grown as part of commercial farming operation."

The issue with the classification leaves hope for the future, since there aren't regulations designed with drones in mind. while it's entirely possible that the FAA could keep up with its seemingly anti-commercial drone campaign, there's an equal chance that drones could be reclassified in their own category. Such a move could eventually open up drones to commercial use, like delivering packages or providing agricultural oversight.

The FAA's feelings on delivery drones is nothing new, but the latest affirmation seeks to assauge the courts, who said the agency needed to accept public comment on such an issue before clarifying regulations.

Ultimately, a bit of wait time until commercial drones take to the skies is a good thing. Safety is definitely a factor, for one, and considering the logistics of all the companies getting involved (Amazon, Domino's Pizza, etc.) needs to be factored in as well.