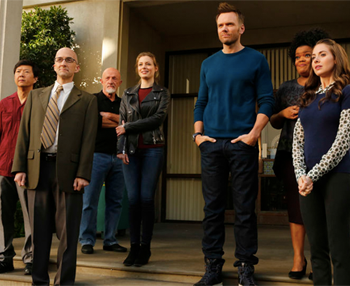 Hulu will not be renewing the TV series Community after all.

More sad news in the quest for Community's #SixSeasonsAndAMovie.

Hulu was in talks with Sony about continuing the series after its cancelation was announced back in May. However, a source close to TV Line confirms that Hulu has decided to not move forward, leaving Community in limbo again.

But never fret, because "Sony does not give up easily." After all, they've been successful in keeping some of their other shows alive after negotiating deals with respective networks, like Damages and Drop Dead Diva.

Hulu is the second company we know about that has passed on renewing Community. When we were first informed of its cancelation, fans pleaded Netflix to take on the task of keeping it alive, like they did with Arrested Development. However, a representative for Netflix stated a pickup was not a possibility.