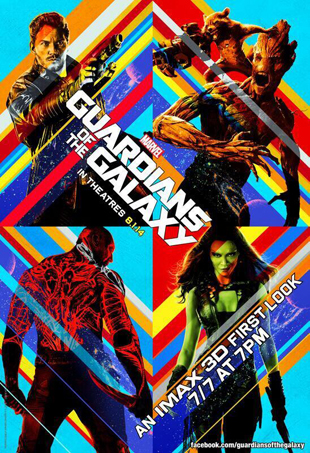 If you've been paying too much attention to the World Cup to notice the serious ramping up of Guardians of the Galaxy marketing, then you could probably use a pick me up after the US team's performance this week*. How's this? On July 7, Marvel plans to show off 17 minutes of footage from the upcoming film in Imax theaters across the nation, and it's going to be free.

While the footage is billed as exclusive, you can bet a lot of it will be expanded versions of stuff we've already seen in the trailers. Hopefully, it'll feature some of the stuff we saw at Comic Con last summer that still hasn't made it into the trailers yet. Oh, and also some new stuff too, like a glimpse of Ronan the Accuser.

Some of you might look at this and think Marvel is a bit worried about Guardians, and I wouldn't fault you for it. GOTG doesn't have the same name recognition as the other MCU characters and the number crunchers are no doubt thinking very hard about what that might mean. But let's be honest, Iron Man was strictly B-level before Robert Downey, Jr. took the part, so they already know they can take relative obscurity and spin it into gold. Plus, the world is pretty much primed to go see anything that bears a Marvel logo and promises to be somehow connected to The Avengers. Hell, the studio is making Ant-Man!

No, I think this indicates that Marvel is extremely confident that Guardians is going to be a huge hit. Why else would they turn what amounts to a trailer that lasts as long as a short film into an outright social event and make it free? Hell, even I'm excited about going to the theater to watch an extended commercial for a movie I'm already planning to see less than a month later. Which makes me part of the problem, but we'll ignore that politely for now.

Anyway, if you want to go, better hurry. Free means people are going to snatch up slows fast. Check out the official Facebook page for more details, or call your local Imax joint.

In the meantime, 2 new Guardians trailers dropped during the last 36 hours. Here they are now for your enjoyment. First up, it's a character featurette that has some stuff we've already seen - especially that Vin Diesel quote. I mean, I love Vin Diesel like the day is long, but come on, is that like the only usable thing they got out of the interview? - but there's more of Draxx than we've seen before, and that's kind of cool.

Aaaand finally, here's a proper trailer that once again suggests this movie is going to be quotable as hell. "Why would you wanna save the galaxy?" ""cause I'm one of the idiots who lives in it!"

*Yes, I know they still advanced because of World Cup math, or as it's known in university circles, FIFAnometry. So yes, that's good news. But man I am not optimistic about the teams chances in the next round. SIGH.