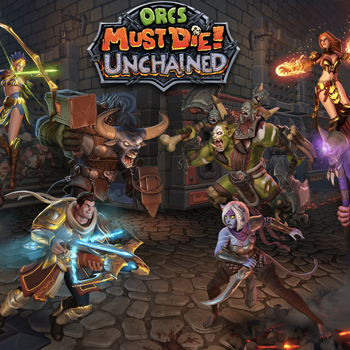 "Haters gonna hate," says Orcs Must Die developer, "There's probably something good about the toxic players showing up and sticking with your game."

Robot Entertainment Orcs Must Die: Unchained designer Jerome K. Jones believes toxic players are necessary for a successful game. If you have toxic players playing your game, it means you're doing something right.

Jones told Polygon, "The good thing is probably that it's a good game. It's holding their interest, it's keeping them around. It's making them passionate enough to give a damn." He goes on to state that, "You need those people there. They're driving the game. They're giving it longevity. They're giving it passion. And when they find something about your game that they love, they defend it to the death. Those are the same people that can go to bat for you."

He believes games shouldn't try to alienate that group of aggressive players, "I don't think those are bad people. You just gotta do your best to deal with them in whatever manner seems to work the best." He believes toxic, or overly passionate, players get upset because they don't understand the development process, but, "They're not going to go away. And honestly, I don't think you want them to."

This mentality is in stark contrast with other MOBAs-though Jones also mentioned he cringes any time Unchained is called a multiplayer online battle arena game-like League of Legends, who goes as far as banning professional players for misconduct.