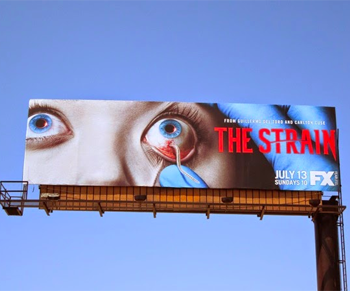 The newest horror series coming to FX The Strain, created by Guillermo del Toro and Chuck Hogan, has upset potential viewers. Billboards promoting the show has a close-up of a woman's eye with a worm coming out of it, which many find deeply disturbing.

BuzzFeed first reported on the outraged reaction some people are having to the billboards, with a few claiming they won't watch the show out of protest. A quick search of tweets relating to this issue express extreme concern for their children seeing the imagery.

A representative then reached out to BuzzFeed stating the network is "in the process of replacing the key art for The Strain on outdoor media in several locations."

The Strain will premiere on FX on July 13th at 10PM Eastern. The series is based on the novel trilogy of the same name, also created by del Toro.

Coincidentally, I was just discussing this very same billboard with my friends last night. While I'm able to stomach quite a bit, the billboard still manages to bother me a little, so I'd like to think FX somehow overheard our conversation and took action accordingly. That said, I can't wait for this show's premiere.