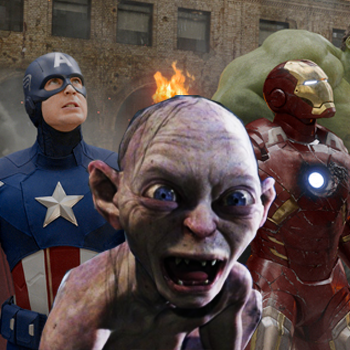 In a brief interview with Variety concerning his return to the role of Caesar in Dawn of The Planet of The Apes, actor Andy Serkis has revealed that he is not only consulting on the motion-capture effects for Avengers: Age of Ultron - he's in the movie.

When asked about his work as a consultant for motion-capture work on AoU (and also Star Wars: Episode VII,) Serkis confirmed: "I'm playing a role (in both films). On 'The Avengers,' I've been working closely with Mark Ruffalo." He would not, however, specify whether his role in the film was physical or a motion-capture character. At this time, Marvel has yet to clarify how the film's main villain - an evil robot named Ultron - will be realized on film, or if any other new characters requiring elaborate FX will be appearing.

Though he has had several acclaimed "normal" acting roles, Serkis is primarily known for his skill at motion-capture performance, whereby his physical movements control the actions of CGI-animated characters. He's likely still best known as Gollum in the Lord of The Rings movies.