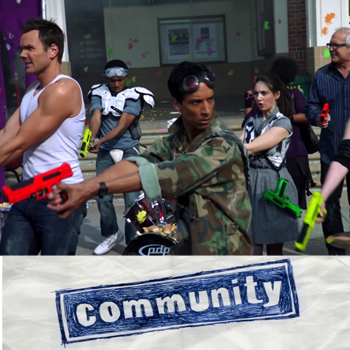 For years, the cult-hit sitcom Community and it's creators have had as their tongue-in-cheek mantra "Six Seasons & a Movie!," and for five seasons shaky ratings and meddling network executives have seemingly conspired to make that prediction impossible - especially when the show was canceled, officially, at the end of Season 5.

Sony Pictures Television has announced that a 13-episode Season 6 will air on the Yahoo Screen streaming service this fall. Reached for comment, creator Dan Harmon stated: "I look forward to bringing our beloved NBC sitcom to a larger audience by moving it online. I vow to dominate our new competition. Rest easy, Big Bang Theory. Look out, Bang Bus!"

Originally launched as a wacky ensemble sitcom about a diverse group of misfits partnered in a Community College study group; Community quickly revealed itself as something much more bizarre and elaborate: Peppering it's narrative with sci-fi, comics, movies and other "geek culture" references and finally tipping its hand as a reality-bending franchise in its own right; complete with fantastical stories, alternate universes and elaborate metaphysical digressions that all (somehow) are actually supposed to have occured in the series' "canon."

At this time, there has been no confirmation as to how much of the cast or creative team from the most recent seasons will carry over into the new production. At least two of the original main cast, Chevy Chase and Donald Glover, departed before the initial cancellation. Harmon is also currently prepping the second season of his hit Adult Swim animated series Rick & Morty.