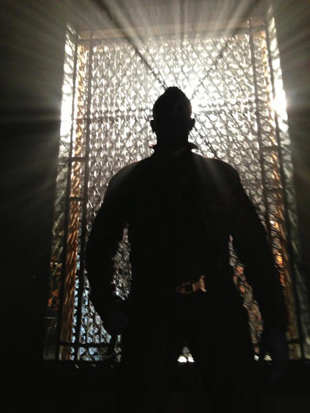 Warning: It's basically a silhouette. But it's cool.

We know Michael Rooker has been cast in a small role in Guardians of the Galaxy as Yondu, longstanding member of the Guardians in the comics, but so far we haven't seen diddly. Until today that is. Thanks to James Gunn on Twitter, now we can say we have. Seen diddly, I mean. Literally. Earlier today he tweeted the picture you see here of Michael Rooker in costume as Yondu, and as you can see, it's... obscured by light and shadow.

First introduced in 1969 on the pages of Marvel Super-Heroes #18, Yondu originates in the 31st century, on a planet orbiting Alpha Centauri. Growing up as a member of the primitive, blue-skinned Zatoan tribe, he meets human astronaut Vance Astro, a refugee from an Earth conquered by an alien race of invaders called The Badoon. After some hijinks the two become friends, and when The Badoon show up to conquer Yondu's homeworld, he and Astro escape and go on to form the original version of The Guardians of the Galaxy to fight them. This version lives in the universe of Earth-691, by the way - the mainstream Marvel universe, where the Peter Quill version of the team lives, is Earth-616. Read more about it here..

Yondu never becomes a member of the Earth 616 Guardians, but Vance Astro ends up at one point frozen in ice and transported to that universe, where he inspires Peter Quill and co. to adopt Guardians of the Galaxy as their team name. No doubt Yondu will not be from an alternate universe in James Gunn's movie, but I can't say I'm sorry he's making an appearance anyway. Incidentally, Yondu has a red mohawk in the comics. If you squint real hard, you can see that Rooker appears to have a much smaller mohawk in this picture.

Despite the total lack of any detail in the image, aside from a certain, ineffable Michael Rookerness that even darkness cannot conceal, this looks undeniably kind of awesome. By which I mean to say I've completely been sucked in. I want this movie to be out now.