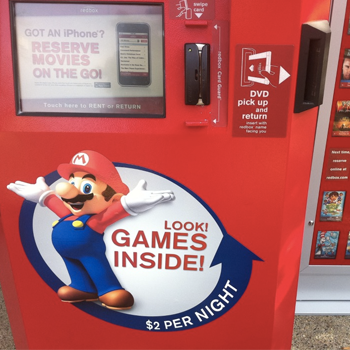 About 20 to 50 percent Redbox customers will buy a video game after renting it.

Redbox, the automated kiosk that provides movie and video game rentals at over 35,000 locations, plays an important role in the expansion of the video game industry, according to Redbox director of video games Ryan Calnan.

Consulting firm Interpret recently conducted a study on behalf of Redbox to record user engagement, and Calnan was surprised-- but happy--by the results. It turns out that they tracked a 20 to 50 percent conversation rate of Redbox customers buying a game after renting it. In fact, 50 percent of Redbox customers have stated that they will only buy a game if they can play it first, "We've been talking to our customers for the last couple of years, and that's the aggregate result that we got."

That figure is significant enough for publishers to take notice, and Calnan says they are doing so already, "So what we're seeing is publishers supporting the notion of the recreational gamer bringing incremental revenue to the publishers and that this trial is leading to a conversion."

Additionally, Calnan explains that publishers are recognizing the reach potential Redbox has, given that its consumer base is a mix of both movie watchers and gamers (who we predict has a large chunk of casual gamers). Companies like Deep Silver and Square Enix are honing in on that demographic. For the release of Saints Row IV, Redbox worked with Deep Silver with an e-mail marketing campaign and by placing promotional stickers on kiosks, helping Saints Row IV reach an audience it might not had access to previously. The same was done with Thief.

When Calnan was asked about his thoughts on streaming services like PlayStation Now he seemed confident, "I think that both can live side-by-side. We're expanding the edges of gaming, and I think that customer is very much attached to that physical product still."