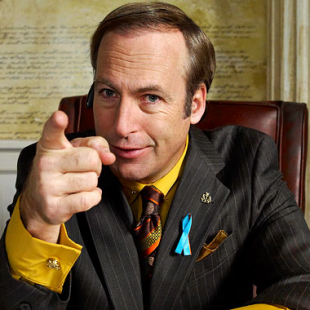 AMC's Better Call Saul might be able to use it's back and forth timeline to integrate cameos from the cast of Breaking Bad.

Some minor spoilers ahead!

Breaking Bad came to an end last year with a final season full of devastating discoveries, tragedy and, of course, a ton of meth. Even with the saga of Walter White finished however, it's recently been revealed that fans might see more of the suburban drug lord and his cohorts in AMC's in-the-works spin-off Better Call Saul.

Speaking about the show in a recent interview, co-creator Peter Gould confirmed that the show will employ a shifting timeline that could make it easy to more naturally incorporate characters like Breaking Bad protagonist Walter White. "One of the great things about having a time line which is flexible is that perhaps some of it takes place before Breaking Bad, during Breaking Bad, and after Breaking Bad. That gives us the ability to bring back characters that were killed on Breaking Bad, "

None of this, of course, is to suggest that Gould and fellow co-creator Vince Gilligan intend to let Better Call Saul simply ride Breaking Bad's coattails to success. "We want to make a show that stands on it own, is its own story and is a brand extension," said Gould. "We think we have a story that is worth making. ... We could never dream of the kind of success that Breaking Bad had and the love we got from the fans. But (with 'Saul') at a certain point you have to do the best job you can and tell the best story that entertains you, get a good response and hope people like it."

Better Call Saul is currently set to premiere in early 2015 and, according to Gould, AMC has already confirmed it for a second season.