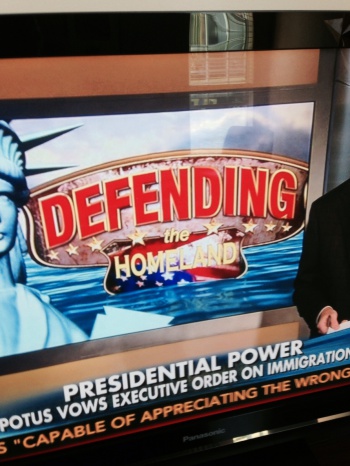 Fox & Friends, in a piece on Governor Rick Perry's response to President Obama's statement on immigration, apparently swiped BioShock Infinite's logo to make its point. Ken Levine tweets that he thinks it's irony, not breach of copyright, which begs the question: does this mean that someone over at Fox has actually played the game through to the end?

The full video can be found over here, if you're feeling keen. Perhaps Governor Perry ought to grow a beard. It might lend him gravitas, but in any case the immigration argument is straight out of Infinite, albeit with Fox's special twist.

"If the President of the United States is really serious about securing the border, we can show him how to do that," Governor Perry moans, "But I haven't even had a phone call from this President."

This isn't the first time a conservative organization has used BioShock's imagery for its own ends. Back in late 2013 a Florida branch of the Tea Party put up BioShock's Guard Against The Foreign Hordes image on its Facebook page, though it's not entirely clear that the group knew what the game was about when it boosted the image.

Ken Levine isn't too worried about it. As he posts on Facebook, he's "glad to help," though that might have been intended ironically.