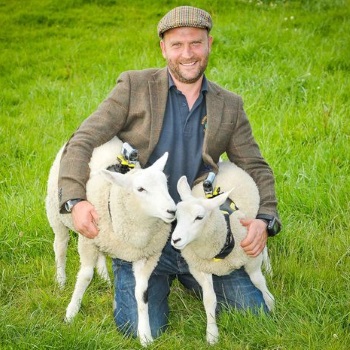 Five sheep have been outfitted with Sony ActionCams for the Yorkshire leg of the 2014 Tour de France.

Five sheep from the Harewell Hall Farm in Yorkshire, England have been drafted as camera operators in time for the 2014 Tour de France. The first leg of the Tour de France begins on Saturday, July 5 in Leeds, and ends 190 kilometers (118 miles) later in Harrogate. Along the way, the competitors will be filmed by farmer Ian Hammond's "sheepcams". A Sony HD AS100VR ActionCam, mounted on a modified dog harness, has been fitted for each of the five sheep.

The remote control cameras, which are similar to a GoPro, are splash-proof and feature Advance SteadyShot stabilization, which will compensate for the sheep's wobbles. The ActionCams will be remotely controlled by Hammond, using Sony's Live-View Remote. Hammond will be able to control all five cameras using the remote. The camera's built in GPS will provide location information for each of the sheep, so that the footage can be overlaid with a map of the race's route. Sony's publicity stunt aims to show off the camera's sturdiness and image stabilization. Hopefully the sheep will manage some decent footage, but for now the photo shoot promoting the camera is fantastic.

Yorkshire has been busy preparing to welcome the Tour de France's Grand Départ. A replica of the Eiffel Tower, standing 25 feet tall, has been built along the route. Other sheep have been painted or outfitted with jerseys to celebrate competitors.

Usually when animals are transmitting data, they are being tracked by scientists, like these sharks who report their position on Twitter. Perhaps one day, animals outfitted with cameras will be used to record images and map places where cars cannot go. What do you think, is there a Google Sheep View in our future?