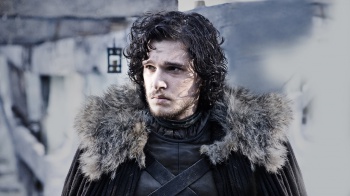 Kit Harington, who plays Jon Snow in Game of Thrones, can't turn up to shoot with a tan, he reveals.

While it might be fun to be part of the cast of HBO's critically-acclaimed TV series, Game of Thrones, there are certain drawbacks to it as well. For Kit Harington who plays Ned's bastard son Jon Snow, it's having to constantly look like he hasn't seen sun in months. In an interview with Shortlist, Harintgon reveals some of the things he's mandated by the Game of Thrones' "bosses."

I can't turn up to shoot with a tan...They shove so much mud on your face it doesn't really matter anyway, but yeah, I have to stay pale.

Harington also reveals that for this year's Game of Thrones shoot, he'll be leaving the cold weather of Iceland for the first time and going to Croatia with the rest of the cast for a set visit.

I'm going to Croatia this year. I'm going to do a set visit because I'm sick and tired of them coming back and saying, "Oh we just finished on set and jumped into the sea - it was great!"

Finally, remember back in season 3 when Snow pranced around in his birthday suit? He was asked if he was worried whether his naked body double was out of shape.

The thing is, you have more of a hold over your character than you think. The painful part was watching someone running and walking for me. It's a wide shot and no one will ever notice, but if I think about season three, it bothers me.

Harington can currently be heard in How to Train Your Dragon 2, where he voices "Eret." He will next be seen in the British spy film Spooks where he will play Will Crombie. If you're a fan of the Game of Thrones, make sure you watch this trailer mashup of Disney's Frozen with Game of Thrones' season 4 trailer; and what Hodor wants to say if and when he's given a chance to say something other than his name in the HBO series.