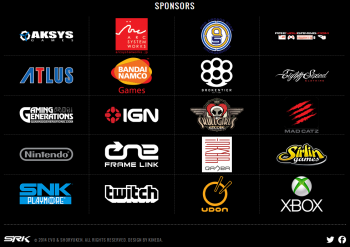 Nintendo has come a long way since 2013's tournament, where it actively tried to shutdown the Super Smash Bros. Melee stream.

If you had told my 15, or even 20-year-old self that Nintendo would be officially sponsoring the world's biggest fighting game tournament in 2014, I would have laughed at you. But, that certainly seems to be the case, as e-sports caster D'Ron Maingrette has just revealed the list of official sponsors for EVO 2014 via Twitter, and there's Nintendo, joining the ranks of Twitch, Mad Catz, and more.

What makes the news so surprising is that just last year, at EVO 2013, Nintendo actively tried to block the Super Smash Bros. Melee stream of the event, and only reneged when met with waves of internet outcry. The attempted blockage was a particular slap in the face to Smash fans who raised $95,000 in EVO's official charity fundraiser just to have the game at the event.

But, Nintendo has turned over a new leaf. At E3 this year, it invited professional Smash Bros. players to play at its Super Smash Bros. invitational tournament, and has been increasingly opening up to the competitive community since the snafu at EVO 2013. Here's hoping that it continues this trend of changing its stance on unpopular policies, and finally puts an end to its backwards region-locking policies.

EVO 2014 will be held during July 11-13 at the LVH Hotel and Casino in Las Vegas, and will be played with the Xbox 360 as the main platform, rather than PlayStation 3. Joining Super Smash Bros. Melee will be Ultra Street Fighter IV, Ultimate Marvel vs. Capcom 3, Killer Instinct, Injustice: Gods Among Us, King of Fighters XIII, and BlazBlue: Chrono Phantasma.