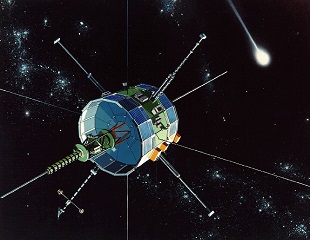 ISEE-3 fires its thrusters for the first time since 1987.

Update: The shelf life of ISEE-3's revival might be short-lived, as the Project Reboot team is having trouble firing the probe's primary thruster system. If the system does not come online, the probe has an estimated three month window before it can no longer communicate with Project Reboot's transmitters (larger transmitter could be used, but at exorbitant cost).

The probe's scientific instrumentation can still be used in the meantime, and the team is still going through other contingency plans. It's not looking good, but not all hope is lost. (update information via SpaceNews.com)

Original Story: Remember the ISEE-3, the 1970's-age space probe that NASA handed over to citizen scientists a few months ago?

After 27 years, its thrusters have finally been fired again.

The handover from NASA to the ISEE-3 Reboot Project team has been a success so far, after the latter finally managed to establish a communication link with the aging probe. After three attempts, the team was able to maintain a connection, which was used to increase the probe's spin rate from 19.16 revolutions per minute to 19.76.

The spin adjustment is only an initial correction, with a larger course correction due later this month.

Launched in 1978, the ISEE-3 (International Sun-Earth Explorer 3) last had its thrusters fired in 1987, and was officially retired in 1997. After a successful crowdfunding round of $150,000, the ISEE-3 Reboot Project team (which is part of the Space College non-profit) took control from NASA in May, and has been working on the probe for the last several weeks via the Arecibo Observatory in Puerto Rico.

After course corrections are complete, the team will focus on evaluating the probe's aging instrument suite.