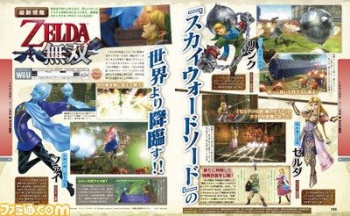 Fi will be a playable character in Hyrule Warriors, and Ghirahim and the Imprisoned will be two enemies in the game.

The Famitsu issue also gives a glimpse of a new weapon for Link: a ball and chain weapon similar to the weapon from Twilight Princess. The small scan also shows two images of Zelda fighting, but it's hard to tell whether it's something new.

We'll likely see a video displaying Fi's play style soon. Most recently, Tecmo Koei released a video showing off Midna as a playable character. A few days prior, it showed off Agitha and newcomer Lana.