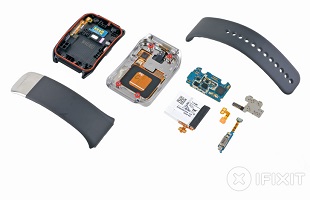 iFixit rips open the two hottest watches on the planet.

As they are wont to do with all new electronics, iFixit got its hands on the first wave of Android Wear smartwatches, and given the gear the formal teardown treatment. The LG G Watch, and Samsung Galaxy Gear Live have both been ripped apart, their innards on display for all geeks to enjoy.

The G Watch didn't leave much to iFixit's imagination, although the presence of a classic paperclip-sized reset switch should make for easy hard resets. The insides are equally unsurprising, replete with Hynix-made DRAM, a Qualcomm system-on-a-chip, and a Broadcom Bluetooth 4.0 radio.

The Galaxy Gear Live has a few surprises in store, including what appears to be a Bluetooth/WiFi combo radio (Samsung does not advertise the WiFi feature, so it is likely dead weight or...Top Secret). The Live uses the same Qualcomm SoC, but Samsung uses its own DRAM in lieu of Hynix hardware.

The teardown also doubly confirms the smaller battery in the Live -- 300 mAh compared to 400 mAh in the G Watch.

Seeing the insides might help sway you towards one watch or the other, if you're interested in buying one at all. Me? I'm still holding out until the Moto 360 hits the streets.