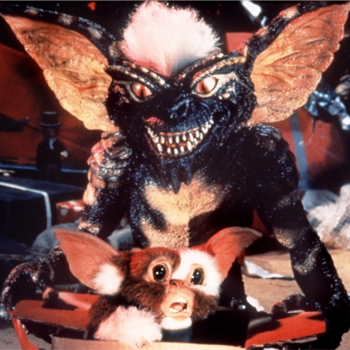 Late on Wednesday, Tracking Board reported that the long-rumored remake of the 1980s monster-classic Gremlins was heading back into production with original writer/producer Chris Columbus involved. Now, Slashfilm says they have a source who claims the film is not a remake, but a "sequel-style reboot" set 30 years after the original - i.e. in the present day.

Released in 1984 from director Joe Dante and producer Steven Spielberg, the original Gremlins was a horror comedy about a young man who receives a mysterious pet named Gizmo as a Christmas present - a "mogwai" whose care includes a strict set of rules including not being fed after midnight and no exposure to water. Disregarding said rules cause Gizmo to spawn a small army of more aggressive mogwai who subsequently mutate into hideous creatures believed to be the "Gremlins" of WWII-era folk legend, seemingly driven not only to cause murder and mayhem but do so while making a macabre mockery of the small town's Christmastime iconography. A more comedy-heavy 1990 sequel, Gremlins 2: The New Batch, found a new army of genetically-modified Gremlins taking over a New York high-rise.

No details of the proposed storyline for the new film have been named, but the phrase "reboot-style sequel" would plausibly suggest a scenario whereby Gizmo would come into the care of a new family, likely leading to a repeat of events similar to those of the first film. Original star Zach Galligan has expressed interest in returning, but no casting has been set and no director has been named.