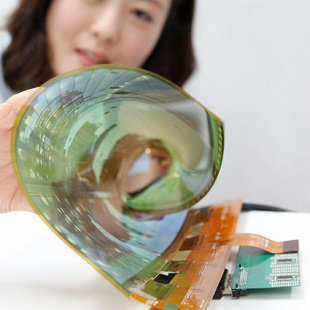 Current prototypes are 18-inch displays, but LG expects 60-inch versions before the end of the decade.

Flexible displays are nothing new, but LG is putting its full weight behind making them bigger, and better.

Going beyond smartphone-size screens, like those found in Samsung and LG phones, the latter has taken the wraps off of a new 18-inch flexible OLED display. It's so flexible, in fact, that it can be rolled up into a one-inch tube -- smaller than your average paper towel cardboard center.

The resolution is 1200x810 -- not quite 16:9, but good enough for anything aside from HD video. This is a prototype, of course, as the exposed circuitry would suggest, but it will serve as a foundation for LG's grander aspirations.

In-Byung Kang, who serves as LG's SVP of Research and Development, says that his company should be able to produce Ultra HD-quality 60-inch flexible displays in or before 2017. Imagine being able to roll up your 4K display into a poster tube-sized protective sheath. Even more imaginative: If battery tech make any sort of quantum leap in the same time period (cotton/carbon batteries, perhaps?), that flexible, lightweight display could be truly wireless.