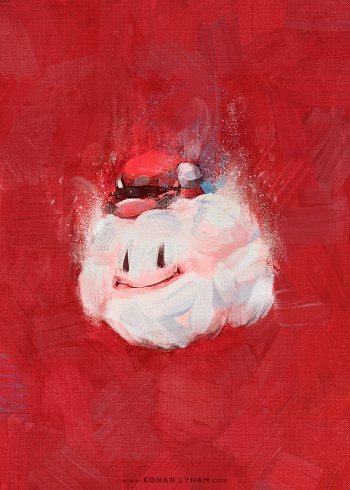 Super Mario World for the SNES wields some pretty powerful nostalgia. The fifth entry in the Super Mario franchise introduced Yoshi, and sold over 20 million copies worldwide. The game has inspired massive embroidery projects and scores of fan art. Philadelphia-based illustrator and designer Ronan Lynam was inspired by Super Mario World to make a series of stunning digital paintings. The five painting set includes a portrait of Bowser's Flying Ship, Mario riding a P-Balloon through the clouds, and Mario plummeting on a Lakitu cloud. Lynam also paints the Twin Bridges, part of the fourth world of Super Mario World, and Ludwig von Koopa.

Lynam spoke to The Escapist about his inspiration for the series. "I had always been a fan of gaming, and video games are often a source of inspiration for new work," says Lynam. "I like to draw a lot of things from popular games that don't really get a lot of whole lot of attention, like giving more life to minor characters, items and locations that aren't often the subject of fan art. Classic games like Super Mario World are awesome, so I chose that since I always loved the charming world and atmosphere the game created. Although, I'm not really sure what inspired Bowser's Flying Ship to have a body wearing a suit. That's a mystery even to me!"

Lynam's digital painting look more like paint on a canvas than pure ditigal art. "I personally enjoy digital work that maintains a more natural and tactile look instead of a more computerized, perfectly rendered approach," says Lynam. "Digital painting is an amazing tool for creating work. It's unique in it's versatility compared to other 2D mediums in that the power of drawing software can really help you create anything you can think of in any way you want."

Lynam has also been inspired to produce illustrations and designed based on other classic games, such as Metroid and Asteroids. "Classic games are often a big inspiration," says Lynam. "There's definitely some nostalgia factoring into that, but there's no denying that a lot of these classic games helped spark my imagination in my youth." You can see more of Lynam's work at his personal website, Facebook, Pinterest and Tumblr. Prints of Lynam's Super Mario World series, as well as his other work, are available through Society6.