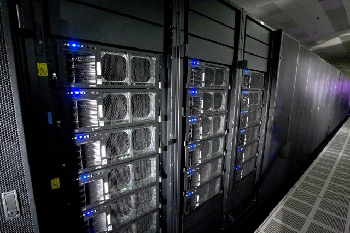 Seattle based Cray Inc has agreed to build a supercomputer that will be put in charge of this nation's nuclear arms. The National Nuclear Security Administration contracted the company to build Trinity, which is projected to be the world's fastest supercomputer, for $174 million.

Trinity will be located at the Los Alamos National Laboratory in New Mexico, and will be designed with both a multi-petaflop supercomputing system and a multi-petabyte Cray Sonexion storage system. This system will include an 82 petabyte capacity and 1.7 terabytes per second of continuous performance, as well as system scalability from 5 gigabytes per second to more than a terabyte per second in a single file system.

Once active, Trinity will assist the NNSA in keeping stockpiles at an optimum state. Virtual simulations could be used to test the efficiency of nuclear weapons in a more accurate fashion. It has yet to be announced whether the supercomputer will be in charge of actually managing its stockpile in the event of a nuclear conflict.

Because of its role in the NNSA Advance Simulation and Computing Program, Trinity will require collaboration between the Los Alamos National Laboratory's New Mexico Alliance for Computing at Extreme Scale and the Sandia National Laboratories. Both organizations have worked with Cray in the past- most recently with the Ceilo (the supercomputer currently used by the NNSA that Trinity will replace).

Cray intends on completing Trinity in a year. The machine is projected to be eight times faster than its predecessor.