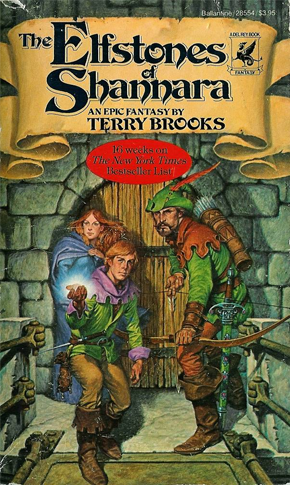 Will nearly 40 year-old fantasy series the next Game of Thrones?

MTV has ordered a 10 episode first season for a series based on the Shannara books, an ongoing series of epic fantasy novels from author Terry Brooks. Smallville's Al Gough and Miles Millar will write the series for producer John Favreau, with TMNT director Jonathan Liebesman set to helm the first two episodes.

The first season will be adaptation of The Elfstones of Shannara, the second book in what is called The Original Shannara Trilogy (but actually takes place at the midpoint of the series' sprawling continuity,) which followed Wil Ohmsford, grandson of a legendary hero, as he aids a community of Elves in protecting their realm from an invading force of demons by reviving a magic tree. No casting announcements have yet been made.

First published in 1977, the books chronicle the ongoing history of The Four Lands; a world of magic and primitive technology that resembles a medieval fantasy setting but is in fact a post-apocalyptic North America of the distant future. The most recent installment, The Dark Legacy of Shannara: The Witch Wraith, was released in 2013.