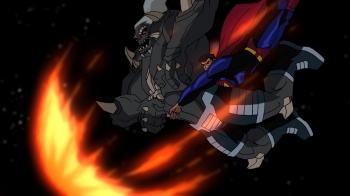 The being that killed Superman is rumored to make an appearance in Batman v Superman according to "past reliable sources" of a site.

While Warner's upcoming Batman v Superman film is already packed with more DC characters than it can fit given the film's focus is on actually pitting the Dark Knight against the Man of Steel, well, we might get one more addition to the roster -- if rumors are to be believed. According to BleedingCool, "sources who have been rather reliable in the past" have told the site that Doomsday, the creature that killed Superman in the comics, will be making an appearance in Batman v Superman! Unfortunately, though, that's all they have at the moment and adds, "much can change in the production process. This may be used purely for flashback purposes on the screen, looking at the life (and death) of Superman. It may be purely for promotional efforts to accompany the film. Or it may not make it to the final cut."

So, what do you make of this rumor? Will Superman bite the dust in the upcoming film? Given Warner Bros. is seriously building up for its own Justice League movie, and Superman being a key member of the team, I'd say it's a safe bet that Supes won't bite the Kryptonian dust anytime soon.